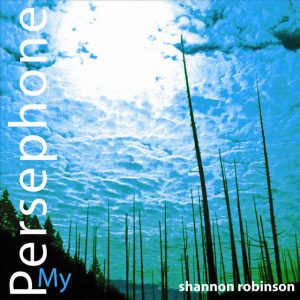 © Copyright – Shannon Robinson and Andrea Koehle Jones (884502800999)
Soulful and haunting, this is a song about love, loss and seasons of grieving. Lyrics by Andrea Koehle Jones reflect our deep and fragile connection to trees. A portion of profits will be donated to children’s environmental programs.
Genre: Pop: Piano
Release Date: 2010

My Persephone is about loss and transition on many levels. It’s about losing someone you love, losing a part of yourself or letting go of a remarkable time in your life.

If the only constant in life is change… then I think trees are the best symbol the world has of change. And I think people are a lot like trees. In the fall, we slow down, turn inwards and gather strength from our roots so we’re ready to burst onto the scene in the Spring.

Trees are so giving and yet they have no voice. My Persephone is dedicated to everyone who truly loves trees.

And then there is the myth of Persephone:
I chose Persephone because she represents everyone who is connected to the wonder of nature – and trees. There are many versions of the Persephone story but I like this one. In Greek mythology, Persephone is the goddess of the Spring. She is the daughter of Demeter, mother nature – the goddess of the harvest. Everyone loved Persephone, even Hades wanted her for himself. One day, when she was collecting flowers, the earth suddenly opened and Hades abducted her to the underworld.

Demeter wandered the earth so broken-hearted, that she withdrew herself and the earth fell into a deep sleep. Persephone’s father, Zeus, sent Hermes down to Hades to demand the release of Persephone. Hades reluctantly agreed, but before she went back he tricked Persephone into eating a pomegranate seed. The seed bound her to underworld for half of every year. The other months she returned to her grieving mother. When Persephone was in Hades, Demeter refused to let anything grow and fall and winter began. When persephone returns each Spring, Demeter brings the world back to life.

You say
you’re here to stay
you say this time
you’ll fight it.

But I know leaves fall
and you’ll fall
down beside them.

Falling down,
underground,
into the deepest blue
I know
– you don’t want to go
but seasons seem to take you….

Falling down,
underground,
into the deepest blue
I know
reaching up, reaching out
but still we take you…